Vladan Seget  Tue, Dec 11 2018Tue, Dec 11 2018  virtualization, vmware  0
While in the past, it mattered a lot whether you added an ESXi host to vCenter via fully qualified domain name (FQDN) rather than via IP address, nowadays this has significantly lower importance. But we'll still go over the benefits and the drawbacks.

The ease of management seems one of the main reasons, but there are others. Most people tend to read words better than numbers. If I needed to manage an environment with 10+ hosts by their IPs, I would be lost. I'd need some kind of a table that would translate the IPs and names, and with this I'd certainly have more chances to introduce an error too.

You know that when you first install VMware vCenter Server and create your first datacenter object and cluster object, you then need to add a host to the cluster object.

vCenter Server itself depends on a domain name system (DNS) too. Before you deploy the vCenter Server Appliance (VCSA) with a static IP address, you must verify that this IP address has a valid internal DNS registration.

Let's get back to our ESXi host, which is configured to use our DNS server architecture (you should put at least two DNS servers within the DNS configuration). 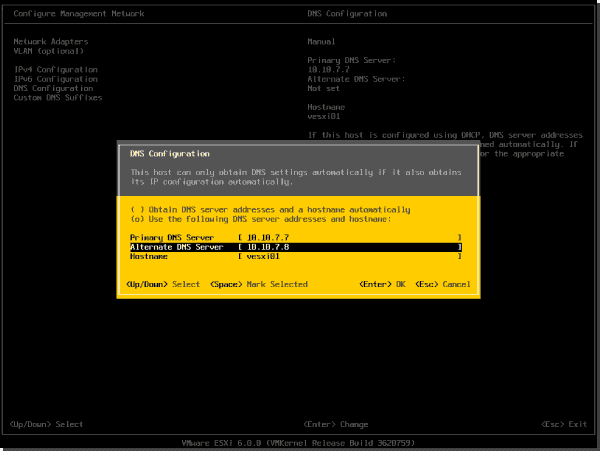 Configure an alternate DNS server for your ESXi host

And when adding a new host into the cluster, you use the FQDN and not the IP address of the host.

Note: In fact, you need to add at least two hosts into each cluster so you are able to activate some of the cluster's services, such as High Availability (HA), VMware Distributed Resource Scheduler (DRS), or a virtual storage area network (VSAN).

Add an ESXi host via FQDN

Previously, within vSphere 4.x, an agent was responsible for VMware HA. The agent depended on functional DNS. However, with vSphere 5.x and higher releases, VMware has eliminated this dependency.

In fact, the newer Fault Domain Manager (FDM) HA agent architecture is not dependent on DNS at all. But today, many applications are DNS dependent, and it's normal. Developers creating these applications also seek simplicity because they're human too.

It's up to you as system administrator to eliminate all points of failure in your DNS. That's why your DNS should be redundant. A DNS service should never be offline. If this happens, you have another big issue you have to resolve first.

You can probably get along with IP addresses until you start hardening your management connections with trusted certificates. So by the time you'll be deploying your own certificates and replacing the self-signed certificates that VMware provides, you'll certainly need a DNS resolution.

Here is a view of a VMware ESXi host console: 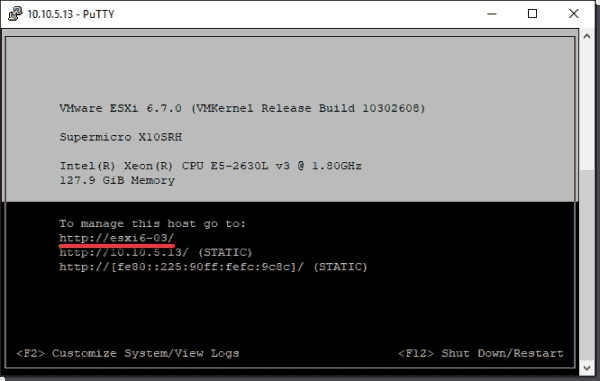 Let's recap some of the advantages and disadvantages of managing vSphere infrastructure when configuring and adding your hosts to vCenter via FQDN versus an IP address.

VMware has eliminated a dependency of their HA function, which is one of the key elements within each cluster. Allowing automatic restart of VMs when you have a hardware failure is the principle of VMware HA. As such, administrators do not need to worry about their VMs and applications because VMware HA can restart those VMs on remaining hosts within the cluster. A VMware cluster has to comprise at least two hosts, but the maximum limit is 64 hosts. vCenter Server itself can manage up to 2,000 hosts organized into clusters.