Add a language pack in Windows 11

Wolfgang Sommergut  Tue, May 3 2022Tue, May 3 2022  deployment, windows  0
Microsoft started to provide language packs as Language Experience Packs (LXP) in Windows 10 1903. At the same time, LPs have still been shipped as CAB files. The duplicate formats have led to inconsistent administration of language settings. Windows 11 now removes some of these issues.
Contents

Traditionally, Microsoft distinguishes between language packs (LPs) and language interface packs (LIPs). The former are complete language packs for important markets. They are not limited to the translation of the user interface, but also include features on demand such as handwriting recognition, spell check, and speech-to-text.

LIPs, on the other hand, contain only a partially translated interface for less common languages, and they depend on a regular language pack as a basis (see this overview).

Trend toward self-service for language packs

In earlier versions of Windows, Microsoft provided language files only in CAB format. It was up to an admin to either integrate additional languages ​​into the system image before deployment or to install them later on live systems using DISM.

With LXPs, Microsoft is moving toward self-service, as it did with fonts. Technically, these are APPX packages that users can also obtain from the Store.

LPs on the FoD ISO no longer as LXP

In Windows 10, Microsoft made LPs available on the Features on Demand (FoD) ISO as both CAB and LXP. It looked like the manufacturer would go all LXP after a transition phase.

However, the FoD-ISO for Windows 11, which is now publicly available and needs no longer be obtained via the VLSC portal, only contains LPs in CAB format. Only LIPs are still available as LXP. 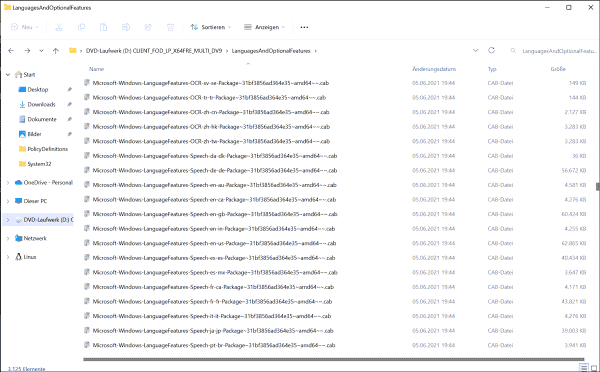 The ISO with the language packs only contains more CAB files; the FoD must be installed separately

Offline servicing is therefore limited to adding packages with DISM. For example, a command to install the French language pack could look like this:

As the name suggests, this is the basic package for French. You have to install this first before you can add FoDs, such as OCR or handwriting recognition, for this language. They are delivered as separate CAB files. Under Windows 10, however, all components of a language pack have been shipped as a single CAB.

In addition to the languages that the admin already provides in the image, users can install their own packages. As already mentioned, this is done via the Store (search there for "local experience pack") or directly via the Settings app under Time and language > Language and region. This app opens automatically when you request an LXP from the Store, so both variants ultimately amount to the same procedure. 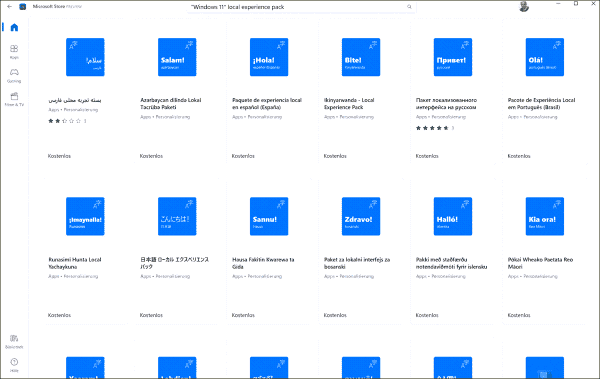 A major step forward in Windows 11 is that standard users can now add a language in its entirety, including FoDs. In Windows 10, they were limited to installing the display language. 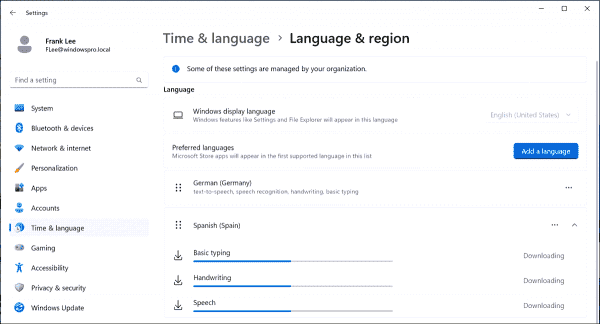 If you follow a centralized approach and don't want users to install language packs on their own, you can prevent this via a group policy. The Restrict installation of language packs and language features setting is responsible for this. 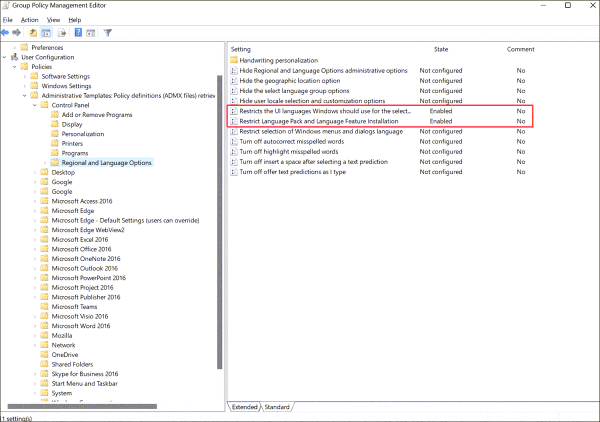 There is also a setting that specifies a language for selected users or all users of a computer. It is called Restricts the UI languages Windows should use for the selected user.

Users will then get the language you specify in the GPO and will no longer be able to change it via the Settings app or the Set-WinUILanguageOverride PowerShell cmdlet.

Windows 11 fixes some inconsistencies in language pack management that exist in Windows 10. For example, only CAB files are available now when servicing images offline, and interactive installation in a live system is based entirely on LXP. An exception is the LIPs, which are available only as LXP.

Another major advance is that standard users can now independently add complete language packages with all FoDs. If you don't want this, you can prevent it using GPO.