Action1: Manage endpoints from the cloud

In this review of new features released in the latest version of Action1, we will take a closer look at some new capabilities and enhancements. These include software inventory, uninstalling software in bulk, running scripts and commands in bulk, and more.

There are relatively few requirements for running Action1 in your environment. Basically, you need a Windows host, a browser, and connectivity to the Action1 cloud. In addition to these basic requirements, the Action1 software that you need to install locally comprises:

The Connector is the on-premises "management" component that enables you to connect your network with the Action1 cloud. While it is not required, the connector scans your network automatically to discover endpoints that can be managed using Action1. The Connector can then deploy the endpoint agent on any discovered nodes in your network for management purposes.

The agent software is used on each managed node to interact with the endpoint and perform discovery and inventory of apps; it also runs scripts on the endpoint. This is a required installation on any endpoint that you wish to manage with Action1. At this time, Action1 only supports Windows for the Connector and the Agent.

Another requirement is that you need to ensure you have egress connectivity enabled for port 22543 to the Action1 cloud. If you filter outbound traffic, you will need to account for this in provisioning the solution. However, the great thing about the Action1 solution is that clients can be managed from any network with the agent installed and network connectivity allowed to the Action1 cloud. This means that remote employees or those working from public or other remote networks can still be managed by Action1.

There have recently been several major enhancements and feature additions to Action1 that serve to greatly expand its functionality regarding discovery and interacting with managed endpoints. These include:

When you navigate to Reports & Alerts > Reports > IT Asset Management > Software Inventory, you will see the numerous reports you can run to display and document the relevant software information. 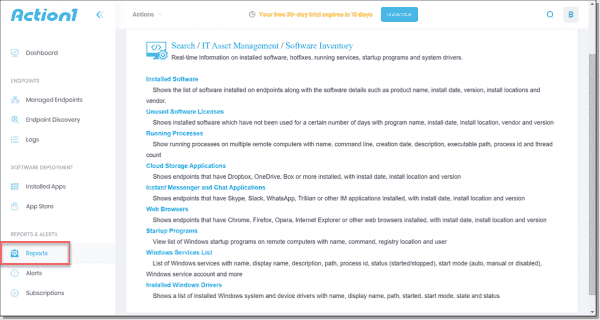 Software inventory is an extremely important part of managing endpoints in your environment. Action1 makes this easy with the Installed Apps dashboard. The Action1 agent queries the installed software on the endpoint and reports this to your cloud dashboard. You can easily perform actions on returned software in bulk, such as an uninstall operation. 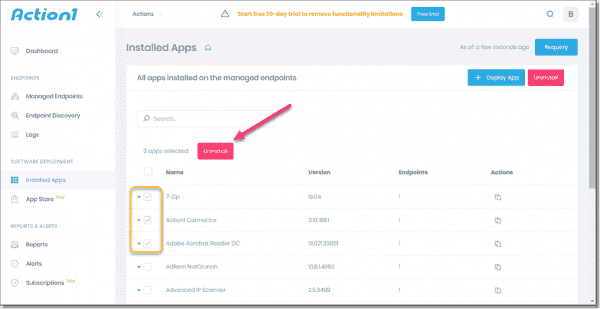 Perform actions on installed apps in bulk, such as uninstalling 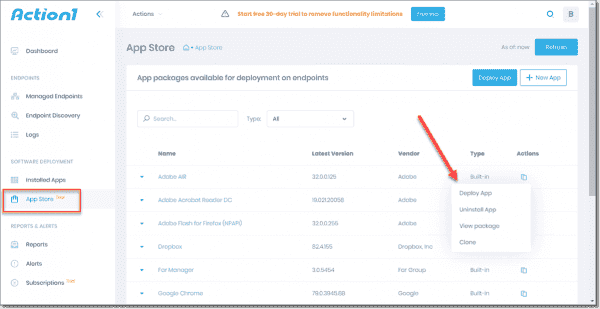 As you can see below, the Managed Endpoints dashboard provides a context menu for any endpoint that enables you to reboot, run PowerShell, run commands, deploy apps, uninstall apps, or uninstall agents. 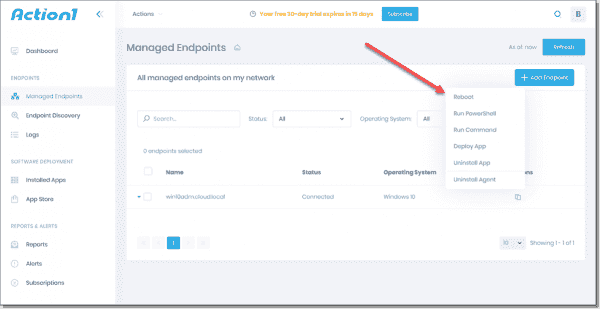 With managed endpoints, you can run PowerShell and other commands

There are several really great built-in features in Action1 that happen "under the hood." These help to improve the efficiency of the cloud-based delivery of applications and management. They also enable Action1 to gracefully deal with offline endpoints.

When packages are installed, especially in bulk, a smart download algorithm is used. For example, if 100 endpoint agents download a very large package, every agent downloads only a portion of the package. The agents then exchange the downloaded portions with each other. This drastically reduces the amount of Internet bandwidth consumed on app installation.

How does Action1 deal with endpoints that may be offline? Even if an endpoint is off when an installation or script is run, the server will pass the installation/script task to the endpoint when it connects to the Action1 server later. In this way, IT admins can be assured that the required updates or script configurations will make it to all endpoints regardless of their power state at the time of the action.

I really like the way in which Action1 is architected to work with your environment. It was really easy to get set up with the cloud dashboard and get a connector machine up and running. The new features added recently, such as the software inventory functionality, are great new capabilities in the Action1 offering.

Check out Action1 for a fully functional 15-day trial version. A free version is also available with some limitations.