A PowerShell implementation of netstat.exe

Josh Rickard  Thu, Sep 6 2018Thu, Sep 6 2018  networking, powershell, powershell scripts  7
My PowerShell module PSNetStat contains the Get-NetStat function that offers features similar to the popular netstat.exe command. You can use it to analyze and display network connections in PowerShell. 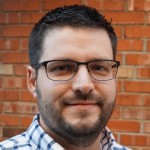 During the lead-up to IronScripter at the 2018 DevOps + PowerShell Global Summit, there were several weekly competitions to prepare for the official competition. One such challenge was during Week 4 where the challenge asked the competitor to generate a PowerShell equivalent to the output of netstat.exe.

This was an interesting challenge for me, so I took a shot at it, and it resulted in me creating PSNetStat: a PowerShell module. PSNetStat went further than the original inquiry, and it recreated most of the functionality of netstat.exe using PowerShell.

Netstat.exe is a command-line utility that provides network statistics. It displays active and inactive network connections (both inbound and outbound) along with protocol statistics and connections. Windows introduced netstat to its ecosystem during the beginning of the Windows NT era. There are ports of the same application on Unix, Linux, macOS, Solaris, and BSD.

PSNetStat currently only works on Windows operating systems, but as time permits, I will also support PowerShell Core in the future. Now, let's take a look at the module layout: 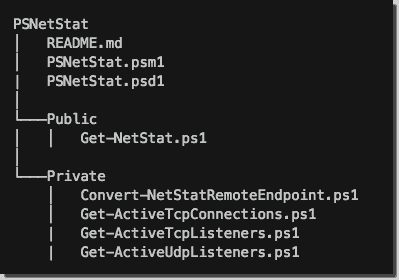 When importing this module using the PSNetStat.psm1 file, it will traverse through both the Public and Private folders and export only the Public module members. You can see this in the script module file:

I'll give a quick shout-out to Warren Frame (a.k.a. PSCookieMonster). The idea of importing PowerShell modules this way originally came from him—at least from my perspective.

As you can see, we are looping through our folder and using the Export-ModuleMember cmdlet to allow only the functions in the Public folder that are visible or usable. The functions in the Private folder are intended for internal-module use only, and we should not use them directly.

The PSD1 or PowerShell module manifest file is a configuration definition file that allows you to specify requirements, dependencies, and much more. A manifest allows the module's writer to make sure the environment it is running on meets all the requirements necessary for it to work.

We can import this PowerShell Module using the built-in Import-Module cmdlet.

After importing the module, we can take a look at the available function by using the Get-Module cmdlet and viewing the exported commands (public functions).

As you can see in the screenshot above, the only public and exposable function is the Get-NetStat function. The other functions within the Private folder are not "naturally" exposed or usable.

Let's take a look at the Get-NetStat function. This is the one and only entry point to receive network statistics using this module.

The default behavior for Get-NetStat is that it will only show the active TCP connections.

Default output of Get NetStat

Below is a screenshot of both netstat.exe's output using the -p TCP command-line option vs. the default output of Get-NetStat: 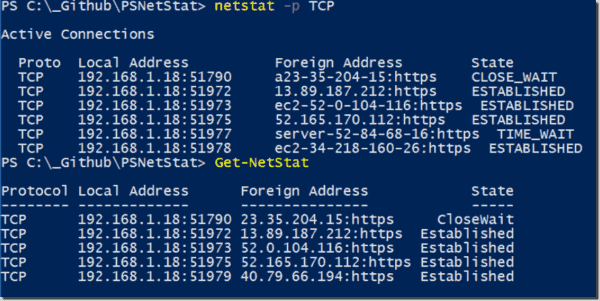 If you would like to see all connections, you can pass in a switch of -AllConnections. By doing this, you will get all active TCP and UDP listeners and all active TCP connections. This option is the most robust option, and it will return all available information. 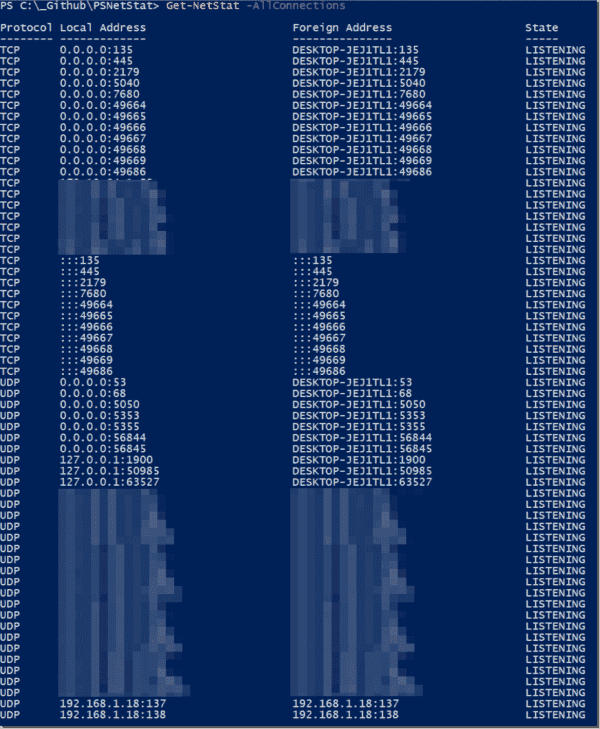 Get NetStat with the AllConnections switch

Using the -AllConnections switch is similar to when you run:

Now, let's dive into the fun part! Let's take a look at one of those private functions I mentioned earlier. Here is a look at Get-ActiveTcpConnections.ps1:

Get-ActiveTcpConnections uses the System.Net.NetworkInformation namespace to retrieve information about all active TCP connections. We loop through all active connections and create our PSCustomObject. Part of the properties of this object also uses another private function called Convert-NetStatRemoteEndpoint to determine whether it is a local address. If it is a local address, we replace either 127.0.0.1 or 0.0.0.0 with the local machine's host name. If it is not a local address, we keep it as it is and return the new formatted string and add it to our PSCustomObject under the Foreign Address property.

My PSNetStat PowerShell module is not exactly the same as the built-in netstat.exe application, since netstat.exe uses unmanaged code and accesses lower-level WIN_API classes to get additional information from GetExtendedTcpTable and GetExtendedUdpTable. The .NET framework doesn't natively expose these classes, so in order to access them, you would need to implement a new Add-Type or C#/C++ DLL.