Jim Jones  Mon, Feb 2 2015Tue, Apr 5 2016  file tools, storage  0
In this post I share the experiences I made when we had to choose a storage system and provide a quick hybrid storage array comparison.

One of my recent projects has been to look at the options for replacing and upgrading our storage system for our VMware infrastructure. If you haven’t been paying much attention, this industry has exploded with lots of new vendors of late and, frankly, a variety of new classifications of system types. In our environment, our requirements were a mix of price, space, and much greater performance than our traditional, spinning disk-based, iSCSI system we were operating with. For the most part, our system was working just fine. However, certain workloads, such as our Cisco VoIP VMs, required much more IOPS than we were able to push even with two fully loaded arrays. As late as three to four years ago, your general classes of SAN storage would have been defined by connectivity only, Fibre Channel, NFS, or iSCSI. Today we are seeing this as a secondary level of options, with the prevalence of flash defining the first level. Your top-tier storage devices are called all flash—arrays loaded with nothing but high-end SSDs. These devices are seen from vendors such as Pure Storage and SolidFire. Next, you have what are known as hybrid arrays—those with a mix of flash and traditional spinning disk used in various methods of caching. The vendors here include Tintri, Nimble, and virtually every major traditional storage vendor. Finally, you still have the old, stoic traditional storage systems, loaded with traditional spinning disks, filling the racks from head to toe in your datacenter. Look at NetApp and EMC as your leaders here, with Dell/EqualLogic filling the SMB space. Our mix of requirements led us to begin looking at the new breed of vendors dealing with hybrid arrays—those that used a mix of flash storage and traditional spinning disks to provide a high number of IOPS. Each of these vendors differentiates themselves in the way they use the caching and how they use compression and deduplication to store more on less. We looked hard at the technology, including going booth to booth at VMworld and reviewing vendors, and we narrowed our search to NetApp’s FAS series devices, Nimble Storage, and Tintri Storage devices. Each had its pluses and minuses. Although we made our choice in the end (Nimble), each may very well be what is best for your environment.

This is a very powerful, and surprisingly cost effective, system once the negotiations are done for the base system. If you are looking to be able to scale beyond a rack or two in the future, the combination of hardware and NetApp’s software stack is legit and allows for a great deal of flexibility. Connectivity can be any that you want, but my impression is that most is done via NFS. For us, that potential complexity is what led us away from it. Although the software stack is powerful if you really only need an array or an array with a bolt on the shelf, it is a bit intimidating for the IT generalist when compared to the other options. Dedupe and compression are enabled all the way down, through both flash and disk.

All in all, this is the Cadillac of the group in terms of speed of deployment and ease of management. The claim is that you can rack an array, plug it in, configure networking, and be deploying VMs to it in under 15 minutes. Again, connectivity is done via NFS. One thing I really liked about Tintri is there are no LUNs to configure; the entire device just presents as a giant single datastore.

What I didn’t like about Tintri was something I found very odd; the company only does deduplication and compression in the flash layer. After the data goes to disk, it is reinflated. For our needs, the lack of a shelf option was a bit of a deal breaker. Tintri’s appliance model means that, when you fill up a device, you can’t just attach a relatively less expensive shelf to your existing array; you have to drop in an entire new unit. This is great if you are a Web 2.0 type of environment; however, for me, it didn’t make a lot of sense.

At the end of the day, Nimble really gave me the warm and fuzzies. Of the new breed of storage providers, this company is probably the most mature, but its tech is legit. Management and deployment were painless; configure a management VLAN and a data VLAN, plug it up, add an IP, and go. Layer in the vCenter Plug-In, and you can then create and deploy your datastores directly from either vCenter client, with LUN creation, performance tuning, and the ability to add the datastore to any and all hosts—all done in a simple-to-use wizard. 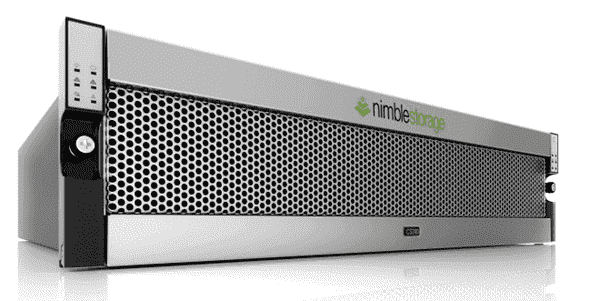 Compression is done all the way through, and we have seen some great results. As a point of reference, our VM environment—fully configured and running with thick provisioned disks—was approximately 15 TB. After converting the majority of VMs to thin provisioning (another selling point of the hybrid devices is that they all have enough IOPS that this is recommended for everything except database-grade workloads) and having Compression applied, those same VMs are currently using 2.6 TB in total. It’s been nice.

I could (and probably will) write tomes on this stuff, but this post tells the basics. All in all, these new grades of storage arrays provide greater performance for competitive prices, with typically an easier deployment when compared to traditional SAN storage. Further, all will provide good, easy-to-understand insight into the performance and monitoring of the systems. If you are in the market, do your research here and you will probably find an option that fits your needs.