Michael Pietroforte  Fri, Jan 1 2021Fri, Jan 1 2021  fun  1
2020 was a year when IT made another big leap because many organizations pushed digitalization to the next level. Cloud and remote administration were supposed to benefit from the fact that many end users had to work from home. However, on 4sysops, we didn't really notice a shift in the interest of IT pros. The results of the author competition show that classical IT with conventional GUI administration still rules IT.

You might wonder then why cloud providers keep growing at a remarkable pace. I think the main reason is that the cloud grows because of new IT, not because old IT is moved to the cloud. AWS keeps growing mostly because purely digital businesses are flourishing. Think of Netflix or Amazon's online store. Because of the new surge in digitalization, new digital businesses keep popping up, allowing the cloud leader to grow further from an already high market penetration.

Of course, Azure is doing well, too. However, for the first time in quite a while, Azure lost market share in Q3 2020, dropping from 20% to 19%, whereas AWS gained market share from 31% in Q2 to 32% in Q3. This is remarkable because Microsoft has been cutting out big chunks from Amazon's market share quarter after quarter for some time now. I believe this is due to the fact that we are beginning to see the first signs of an acceleration in the growth of the digital economy, whereas many brick and mortar businesses are now in trouble. It is hard to tell whether this trend will continue after the pandemic. However, many experts believe that the accelerated push for digitalization will persist. 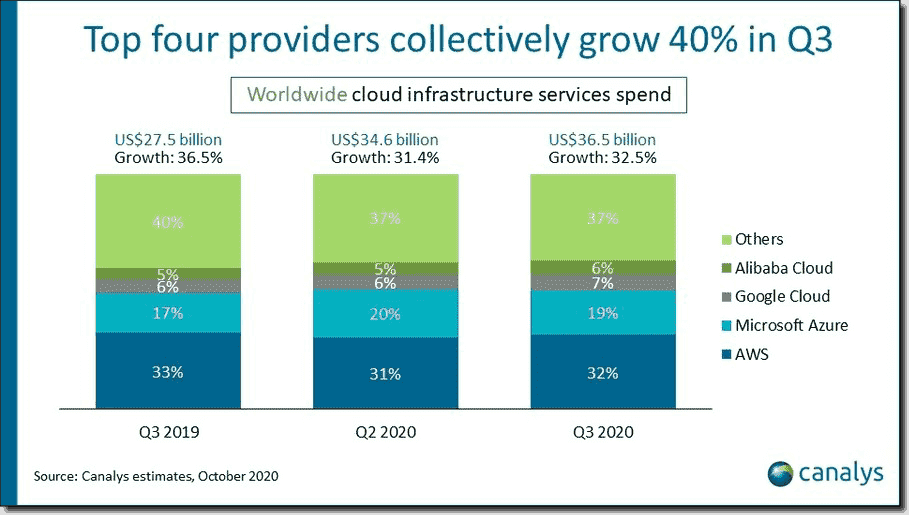 Needless to say, Azure will keep growing anyway. There are still many large brick and mortar businesses that will continue to extend their presence in Azure. Those businesses have been married to Microsoft for a long time, and they need to connect their on-premises IT with the cloud. Amazon still has a hard time convincing those organizations to switch.

However, one thing is clear. Even though we have been publishing a lot about Azure in 2020, these topics usually generate a lot less traffic than conventional on-premises Windows topics. The reason is simply that the vast majority of admins are still doing conventional on-premises IT. The thing is, you need fewer admins in the cloud because lots of infrastructure is managed by the cloud provider. Think of Office 365—that is, Microsoft 365, or whatever Microsoft will call this service in 2021. If you still have Exchange servers in your organization, you know how time-consuming they can be, and setting up a new SharePoint or Teams project does require fewer admins if you don't have to deploy a couple of Windows servers first.

Thus, it comes as no surprise that our author of the year only wrote articles about typical on-premises topics. Leos Marek only published the minimum (for taking part in the competition) of six articles in 2020, but all of them performed very well. He also wrote the second most successful article, which was, of course, a super classical topic: Windows Server 2016/2019 Group Policy security settings.

Our second place goes to Sami Laiho, who mostly wrote about Windows desktop topics. He published 13 articles in 2020. Of course, the more articles you publish, the harder it is to find topics that perform well. Thus, it is noteworthy that Sami is only a few points behind Leos.

Even more remarkable is Wolfgang Sommergut's third place. With 48 articles, he published twice as many posts as Leos and Sami together. He also wrote the best article of the year: Scan, download and install Windows Updates with PowerShell. Considering that Microsoft is still creating a mess with their update "strategy," you can imagine that quite a few admins are struggling to deploy all the fixes to patch last week's fixes. For the sake of completeness, Wolfgang also published the third most successful article. And guess what? It also was a super classical topic: Deploy and manage Microsoft Edge using WSUS and GPOs.

It is interesting to note that PowerShell topics in general lose track somehow. Wolfgang's #1 article was the only one in the top 20 this year. This doesn't mean that PowerShell has lost any popularity. It just shows that fewer admins are reaching out to the web to learn about PowerShell because many IT pros already know all they need to know for their daily work. Because of the move from Windows PowerShell to PowerShell Core, Microsoft was unable to innovate, and we saw few interesting new features in PowerShell.

If admins turn to the web about PowerShell, it is usually because they face relatively specific topics. These questions often end up in forums, which is the reason why David Figueroa claimed third place in our member competition. (I don't take part in the competition.) David offered great support in the PowerShell forum and in blog comments.

The runner-up in the member competition is our author of the year. Leos Marek not only published some great articles, he was also heavily engaged in the 4sysops community. He answered many questions in blog comments and in our forums, helped discover new website bugs in the community forum, and also published quite a few IT administration news posts.

Our undisputed winner of the member competition in 2020 was also member #1 in 2018 and 2019. Paolo Maffezzoli reliably posts IT administration news almost every day. Honestly, if you follow these news updates, you don't need to subscribe to any other IT news site because everything an IT pro needs to know appears here. Paolo also often contributed to the forums and blog comments and helped me debug the site.

Of course, many other members, non-members, and authors contributed to the 4sysops community in 2020, and I want to take this opportunity to thank all of you! Let's hope that IT will continue to boom in 2021. I wish everyone a Happier New Year!